Fighting Felines - Helping Mercy and Ranger get along 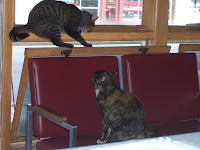 Over the past week or so, Ranger and Mercy have been at odds with each other in the mornings.  It would be hard to tell who was starting things - Mercy or Ranger.  We would suddenly hear the 'aurggggg" sound of Mercy as she was staring at  Ranger who would mindlessly pounce on her in a playful way.  This was not what Mercy wanted - she would then roll him over and the two would wrestle in a sort of confused play fight.  Usually tossing the tube toy would get Ranger to redirect, but not now.  Actually Mercy seemed to be starting it.  What is going on?

Lots of clients deal with this very same scene at home.  These 2 cats get along much of the time, they actually do groom each other and the outbreaks were not daily.  Aggravating especially since these 2 cats live at an animal hospital that promotes good behavior!  How embarrassing to say the least.  I decided to treat my staff and the cats like a case.  Let's document what is happening, what does help to decrease the fighting and observe both Mercy and Ranger for what is triggering the events.  At first you think you know what is happening, but as we took a closer look we found out a few things.

These are the facts we already knew.  The skirmishes were typically in the morning shortly after Ranger and Mercy were allowed free access to the clinic. The fights were in the waiting room area when no clients were there. Putting a baby T shirt on Ranger helped  him to be less of an agitator.  Now he loves to dress up, but it somehow it was helping him to ignore her threats.  I surmised that Mercy may want to have more range for facial rubbing of the clinic.  As she has aged she does not get up on all the counters for rubbing and perching like she used to.  So  now Mercy could be free in the whole clinic while Ranger was still confined ( he still gets into things).  Ranger would get dressed up each am before he had free range with Mercy.  Rachael made up an incident sheet to record where - when - who and what started it.

We discovered a few things!  Mercy was picking on Ranger most of the time. It just looked like he was the bad guy because she was vocal and he would be more physical.  On closer look he  was pouncing back in play not aggression.  She would stare him down as he passed by the chair at the laptop in the hall.  As I found out Mercy loves to sit on the chair for the workstation in the hall.  She waits for it to be free.  So there are times she wants to perch but can not get to her favorite spot.  As a solution we put another chair - same type and kind right next to one she wanted.  Mercy will go up there or move over to it. She also gets her favorite treats at this new perch occasionally.  Fighting has decreased !!!!!  I think we are onto something.

Ranger lounges on the high reception counter,hammock bed and shelf in the waiting area.  Mercy likes the lower reception counter and waiting room seats too. Now that there is one more perch for her in a different area.  This has expanded the space for the cats and has brought kitty harmony.
The chair is staying put. It is the right size, height and in the right place. I think I will name it "Mercy's chair"

Overall the number and intensity  of incidents have decreased.  The solutions were simple once we opened our eyes to what our cats were  needing.  Mercy wanted more alone time to facially mark the clinic and another perching area. One last thing, Mercy brought up a huge hairball as things were getting better.  Maybe she was having some pain in her bowels that was also an agitator.  We have increased her pumpkin dose to help with that.

Now we just have to keep up Ranger's wardrobe! He does love to dress up.  I would love to find a forest ranger outfit for him to go with his name.  If anyone has ideas  where to get one let me know.

Dr. Sally J. Foote DVM
Tuscola, Illinois, United States
I am a 1984 graduate from the University of Illinois College of Veterinary Medicine , and certified Feline Behavior Consultant practicing in central Illinois offering veterinary behavior consults with general practice. I am passionate about helping clients know what is best for their pet's body and mind. Come to my website at www.drsallyjfoote.com to learn ways to make treatment and handling easier for your pets.