Good Bye Butterscotch - you were a great teacher

About 2 1/2 weeks ago, our beloved yellow lab mix Butterscotch had a stroke.  He started off with some increased stumbling and balance problems on Saturday night, that progressed the next day to a full blown head tilt and falling to the side.  Despite treatment, he became worse over the next day and my husband, daughter and I made the decision to end his difficulties by bringing him to a friend DVM for euthanasia.  It was difficult for us, and Butterscotch was able go go peacefully with Tom and myself at his side.  We miss him, and Bella is adjusting without the big guy.   You read an awful lot about the crazy Bella dog, but now I will tell you about  Butterscotch. .


We adopted Butter from the local shelter about 7 1/2 years ago at an estimated age of 8.  He was picked up as a stray with a leg so crippled with arthritis he could not walk on it.  He was gentle, friendly, and looked like the first dog Tom and I owned.  When I saw him, I knew we had to keep him.  Our dog at the time Sissel was getting a bit older and we needed  to have the back up dog to avoid the empty house syndrome after the older pet dies.  Sissel was not always receptive to other dogs so, I thought let's have them meet  and see how it goes before making a commitment.  Do pets know what we need and want?  Sissel just came up to him, sniffed him over, and laid down and ignored him.  There was not tension, no staring, guarding or anything.  Butter was his usual laid back self so home he came.  The two of them always got along - no fighting over toys, food, space or anything.  Butter thrived on medication to reduce the pain in his knee, joint diet and daily walks.  He was such a loveable dog around people and kids he was almost perfect.

One day while walking him, he saw a dog across the street - he immediately wanted to rush up to that dog in a very forward and not exactly friendly way.  The dog was a little toy breed and the manner that Butter hunkered down with his head level, silently stalking I knew right away - we have some predatory aggression here.   A few days later in the back yard  he quickly lunged after a squirrel using the same manner  and I realized this dog very likely predated on small furry animals, so he has a strong predatory aggression drive.  There was even a time Butter got a squirrel in his mouth and Tom had to wrestle the poor creature out.  I learned very quickly that not all dog aggression presents the same.  Some is very specific to the situation - such as predatory aggression but is still something to manage and watch out for.  From this incident I knew Butter would not be a dog to have at a dog park.  He would very likely aggress on a small dog badly and there was no way I would take that chance.  Butter did not get into a fights with a little dog, but there were a few close calls when little dogs off leash would come trotting up to him and we had to get him away.  It was very surprising to people who knew how friendly and sweet he was.  I guess that is my point - Butter showed how there are different types of aggression and it takes a specific situation for it to show up.  One aggression screen does not screen for all types of aggression.

Butter had thunderstorm phobia.  I never had a dog with this problem, but I was aware of other client's dogs who were affected.  I had been reading on new treatments using pheromone products and other medications but I was not really clear on what worked best.  The first time we had a storm with him home, the kitchen table started shaking.  I was wondering what was going on when I saw that Butter was trembling and laying against the legs of the table thus causing the shaking.  I could not coax him to settle and I could see him drooling and panting and pacing.  I had just gotten the DAP/Adaptil collars in so I ran back to the office and put one on him.  He settled down after 10 minutes which made us all feel better.  Over time I learned more and developed a plan that had Butter sleeping through many a storm.  From my experience with him I wrote out Butterscotch's play list of songs that soothe dogs through storms and my blog entry Thunderstorm nightmares no more showing how to set up an area for a dog to calm during a storm.   So, Butter is still helping other fearful pets learn to settle and calm with fears. 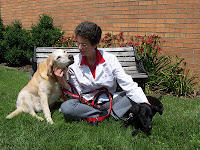 Butter was a wonderful guest on television .  He appeared on CI living Champaign a couple of times and was on the Paw Report with WEIU twice.  He was such a hit at the stations.  When I would walk through he greeted everyone at every desk and they loved to pet him.  I don't think he ever upstaged any host and he was very polite about any bathroom needs taking care of that before we entered any building. He is also featured on some of my instructional videos on my clinic website www.okawvetclinic.com  again, teaching clients, veterinarians, and technicians about rewarding during the veterinary visit to make it less stressful on the pets and everyone.   So, again he is still teaching others about behavior and good pet care.

Every pet has a special place in one's heart.  Butter certainly has that in my families.  I do miss him. My sadness is passing and writing about his gift of teaching here really helps me to accept his loss. If you have also lost a pet - I sympathize with your loss.  It is never easy to go through.  I hope that you too can see he ways your pet has helped teach you about life and that those memories give you peace.

Dr. Sally J. Foote DVM
Tuscola, Illinois, United States
I am a 1984 graduate from the University of Illinois College of Veterinary Medicine , and certified Feline Behavior Consultant practicing in central Illinois offering veterinary behavior consults with general practice. I am passionate about helping clients know what is best for their pet's body and mind. Come to my website at www.drsallyjfoote.com to learn ways to make treatment and handling easier for your pets.